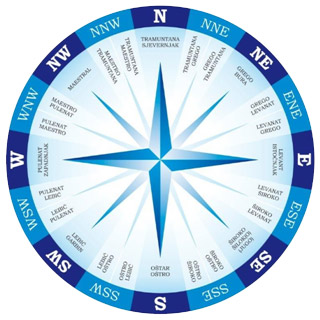 TRAMONTANA, also called tramuntana and tremontana, is a strong northern to northwestern (in wider Split area) wind generated by passing of the cold frontal over the Adriatic. Of rather short duration – usually after a single day it turns into bura – tramontana arrives suddenly and very soon reaches stormy force, causing gales and very rough seas.

BURA is a dry, very cold northern (from NNE to ENE) wind character ised by violent gusts. A katabatic (from Greek: going downhill) wind,it blows over the slopes of coastal mountains (such as Velebit and Biokovo) bringing cold air that – due to its weight accelerates and hits the sea with gale force, spreading in form of a fan (like fingers!),causing a lot of troubles, especially to inexperienced sailors because of its strong blows and rapid change of direction. Around midday, with warming of the air by sun radiation, it weakens – Split seamen say that bura takes a lunch break – but in the afternoon it gets stronger again (when it wakes up and enjoys coffee!), reaching its biggest force in early evening hours and again at dawn. Usually “announced” by thin white clouds (caps) over the summits of coastal mountains, bura leaves you little time to escape or prepare (to reef the sails) before you meet its first stroke. Bura creates very unpleasant short, but considerably high waves with lots of foam and spray, making breathing hardly possible, so that a man overboard, even with his/her life vest on, has scarce chances to survive unless promptly recovered (which is a very demanding operation due to scarce visibility). Along the Adriatic coast bura has its “favourite”regions where it is both intense and frequent, such as the Gulf of Trieste, the Kvarner Gulf, Velebit Channel, wider Šibenik area, the Kaštela Bay, Makarska and surroundings Žuljana cove on the Pelješac peninsula. Further from the coast, bura gains in directional regularity, but force as well, so in the aquatorium of the Palagruža islet it reaches stormy strength. Bura is much weaker along the western Adriatic coast, but it still can be dangerous because there are no natural safe havens with exception of the Manfredonia area,to south of the Gargano peninsula. In the winter season bura lasts up to two weeks, oscillating in force and bringing cold rainfall or even snow (cyclonal, also called the dark bura).

THE ADRIATIC EASTERLY, OR LEVANT is a cold wind that usually brings clouds and rainfall. Similar to bura in that it brings low  temperatures (though as prone to gusts), and to jugo (by its regularity),levanat is a winter wind frequent in the February-March period,when it can reach stormy force and last for many days. Although good for sailing, due to its force, levanat is not popular in the sailing community because of the cold weather it brings. This wind should not be confused with the summer morning breeze also blowing from E (as podsunčan, a light thermal wind which in the early afternoon hours turns into maestral).

CIROCCO is a strong and warm wind, blowing from ESE to SSE, bringing abundant rainfall. It is more frequent in the south Adriatic area, generally characterised by strength and very rough seas. A rare all-year-round Adriatic wind, jugo reaches its maximum strength after two or three days of constant blowing, when – in the autumn months in the south Adriatic, and in the springtime in the north Adriatic area – it often turns stormy and creates the biggest waves of this closed area. Of variable duration – usually lasting for three days, but sometimes (in the winter season) a whole week – jugo has its favourite playgrounds: from Dubrovnik to the mouth of the Boka Kotorska Bay and in the wider area of the Kamenjak Cape (southern tip of the Istrian peninsula), as well as open seas of the Mid-Adriatic.

CYCLONAL SCIROCCO is a moderate to strong wind, sometimes reaching stormy force, blowing from ESE to SE, caused by a cyclone progressing from the west Mediterranean into the Adriatic area,bring heavy clouds and a lot of rainfall. Mostly generated by secondary cyclones in the Bay of Genoa cyclonal JUGO reaches north Adriatic first and then spreads southwards, gradually losing strength. Easy to “read” in advance, by misty horizon, progressive development of cloud systems, air pressure fall, acceleration of the sea current, high tides. Cyclonal jugo is the most frequent variation of south wind in the Adriatic area.

ANTI-CYCLONAL SCIROCCO is a rather rare springtime or autumn wind generated by a deep cyclone over north and northwest Europe and an anti-cyclone over the east Mediterranean. Typically this kind of wind will be accompanied by a slightly misty sky with rare high clouds moving fast from WSW, dry air, high temperatures and only will it reach stormy force. But, as old seamen would say: You should watch both the cloudy bura and the fair jugo! Anti-cyclonal jugo is everything but predictable, while škura (dark) bura hits suddenly,making navigation almost impossible because of its equally unpredictable force changes.

OŠTRO is a rather moderate wind blowing from S, thermal by genesis that “follows the sun” and precedes maestral. With global climate changes and summer maestral losing regularity, oštro (its weak variation also called oštrin) sometimes keeps blowing all day long, until sunset.

LIBECCIO is a SS W to WSW mostly winter wind of short duration,but generating extremely rough seas and bringing abundant rainfall.
Announced by extremely high tides, lebić also causes poor visibility.
It is generated by passing of a cyclone eye over the continental part of Croatia and progression of a cold frontal; a deep depression over the north Adriatic causes a strong southwest wind, air pressure fall and unstable cloud systems – that swiftly turn into stormy west wind. Such an occurrence in the summer months causes a very dangerous abrupt gale called garbin or garbinada, inevitably causing damage on boats and on the shore.

PONENTE is a local Dalmatian name for a westerly wind more frequent
and stronger in the north than in the south Adriatic area. It progresses in several rather unusual phases: first, the western sky is fair, there’s practically no wind, the sea is calm… then a curtain of heavy clouds comes from the west, covering the open sea islands, after short wind gusts there’s a calm again – soon followed by a very strong wind creating high and long waves, extremely unpleasant and dangerous, especially in the longitudinal channels. Pulenat, as a typical storm wind, should be well respected and feared!

MISTRAL is a constant mostly thermal Adriatic wind, best beloved by the leisure sailing community, once upon the time so regular that watches could be wound by its appearance. Generated by seasonal etesian NW air streams and local thermal effects, maestral usually appears with the coastal land getting warm and causing fall of pressure due to rising of the lighter air – substituted then by colder air steaming above the sea. Having been born as zmorac (oštrin) at about 9 to 10 in the morning, it suddenly collapses around noontime and regenerates soon as a pretty strong westerly to northwesterly wind, depending upon configuration of the coastal range.It reaches its peak at about 2 in the afternoon, then gradually collapses– with a typical “last stroke” around 5 in the afternoon.
Maestral gets stronger from the Bay of Trieste to the Otranto strait,where it can reach gale force, always leaving high “dead” waves very unpleasant to navigate over.
A very strong maestral is locally called maestralun that sometimes continues all the night through. The signs to read are white cumulus clouds over the islands and the coastal mountains. A break in its regular appearance is a sign that a depression is on the move.

Along the west (Italian) Adriatic coast, the thermal summer wind is an easterly wind, reaching its maximum force a bit later, at about 4 in the afternoon.

BURIN is also a thermal wind, a night breeze blowing from the landmass to the sea – to compensate for the warm air lifting during the night hours from the sea. Though its name has been derived from  bura – burin practically blows in the same direction, also with variable force – this wind is of short duration and it seldom reaches further than 5-7 miles to the open sea.

Sail it your way with us
& may the winds be with you !

Manage Cookie Consent
To provide the best experiences, we use technologies like cookies to store and/or access device information. Consenting to these technologies will allow us to process data such as browsing behavior or unique IDs on this site. Not consenting or withdrawing consent, may adversely affect certain features and functions.
Manage options Manage services Manage vendors Read more about these purposes
View preferences
{title} {title} {title}